Mountain or city, home is where the heart is 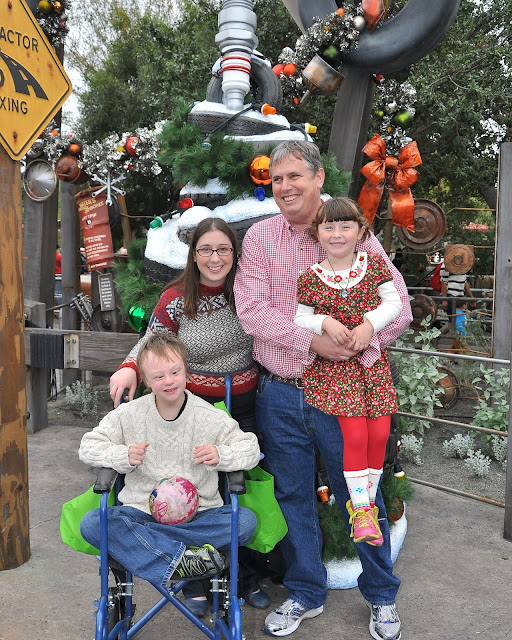 I’m excited to share with you an interview with Michelle Miller of Cypress, Calif. Michelle, her husband Michael, and daughter Maya welcomed Michelle’s nephew Dmitri (above left) into their family in 2011 after the death of both of his parents. Michelle runs Fickle Knitter Design—writing books for people who knit—but had no experience with children with disabilities. Dmitri, now 10, has Down syndrome and autism. Michelle’s daughter Maya is 6. The family brought Dmitri from his home on a rural mountain in Virginia to a city in Orange County, Calif. in October 2011.

BLOOM: What events led to your adopting Dmitri?

Michelle Miller: My brother-in-law Ric—Dmitri’s father—was diagnosed with terminal prostate cancer in 2010. In January of 2011, my sister Miriam died from pneumonia. It was totally unexpected as she was only 45, healthy and young. She had been caring for both her husband while he was sick and Dmitri. I thought it was in everyone’s best interest for Dmitri to spend as much time as possible with his dad, before he died, and we did that with the help of family and some respite care. I went and lived there for three months to take care of them until Dmitri’s father passed away in September. We then had to wait another month for the court to grant me legal guardianship and at the end of October we brought Dmitri back to California with us.

BLOOM: Did you have any experience caring for children with disabilities?

Michelle Miller: No I didn’t. My sister and I talked two times a week for a couple of hours each time, so I knew about Dmitri’s life extensively, but that’s not the same as physically being there. I really hadn’t had any experience with disabled children at that point. I had friends who were disabled growing up in school, but I’d never been in the role of caretaker.

BLOOM: When did you make the decision to adopt Dmitri?

Michelle Miller: The night my sister passed away I knew I’m the youngest and best equipped in our family to be able to care for him. But for months I worried: Would I be able to do it all and would I do it well? It was scary.

BLOOM: What was Dmitri like when you stayed with him and his dad?

Michelle Miller: I look so much like my sister and when he came home and saw me he went upstairs and cried. It was hard for me to know it was hurting him to see me. He had a lot of behaviours at that time and he fought me at every turn. I’m sure some of those behaviours were anger and grief at not having his mom around. He was doing dangerous things and didn’t have any concept of danger. When I first got to Virginia it was a battle everyday just to get him dressed and I thought: How will I do this everyday for the rest of my life? It was hard. One of his respite-care workers said he viewed me as a maternal figure, and that was why he was testing me. That helped me get through it a lot.

BLOOM: How does Dmitri communicate?

BLOOM: How did you manage to stay positive while caring for your brother-in-law who was dying and your nephew who was grieving?

Michelle Miller: I just tried to stay in the moment as much as possible. I definitely didn’t complain. I wanted Ric to have faith that my husband and I would do a good job. My daughter wasn’t in school yet so she came and stayed with us for a couple of weeks at a time.

BLOOM: What was the most challenging part about bringing Dmitri into your family?

Michelle Miller: Learning how to get him to do the things he needs to do everyday. But I’ve figured out how to motivate him. Chicken nuggets and ice cream are good motivators. He’s a good boy and although he still sometimes doesn’t want to do things, he’s a different kid now.

BLOOM: How did he adjust to coming to live with you?

Michelle Miller: He still had some behavioural issues but he seemed to feel at home right away. We changed the guest room into his room and bought him some special furniture and brought comfort items of his from Virginia. It seemed like he knew this was where he was going to be. But it took a lot longer for him to feel really comfortable.

BLOOM: How did your daughter adapt?

Michelle Miller: She’s amazing. When Dmitri’s dad was still alive, she asked me if Dmitri was going to be her brother. She was only five at the time and I didn’t know how she was able to perceive that. She’s great when we go out in public. She’ll tell people “This is my brother. He doesn’t talk and he has autism.” Dmitri’s dad said Maya was the first kid he ever played with. He would let her come into his room and play with his toys. They would hang out together—more side by side than play. Dmitri lived on a mountain in a very isolated area, so he hadn’t had play dates and regular contact with kids. Maya’s been a tremendous influence on his life and I think a lot of his gains have been through being around her. Now he has regular contact with other children.

BLOOM: How have you changed since Dmitri became your son?

Michelle Miller: You’re trying to get me to cry, aren’t you? I’ve changed a lot. The strides Dmitri makes may be little in other people’s eyes, but I know how hard he’s working and how much he’s accomplished. I embrace and value the small things a lot more. I feel so grateful for everything that I have.

BLOOM: How do you keep the memory of his first parents alive?

Michelle Miller: He hears us talking about them a lot. My sister was a photographer and we have her photos hanging in the house. We have pictures of him and his parents together. My sister was such a big part of my life that it’s something we talk about often.

BLOOM: How did you learn to get the services Dmitri needed and advocate for him?

Michelle Miller: I have a background in physics and that gave me a really good ability to do research. In the months while Dmitri’s dad was still alive, I found out about the agency that provides services to people in our county and I started e-mail contact with them. I talked to as many other parents of children with disabilities as I could, and I read books. There are a lot of wonderful services for disabled folks here, including the special school for children with disabilities that Dmitri attends. Many of the services are offered through our Regional Center system and often are subsidized through special programs. Right now we do respite care and will soon start ABA therapy through Orange County.

BLOOM: Would you say this opened up a new world to you?

Michelle Miller: Yes. We now have a family that we do play dates with that has a son with autism. And we’ve met other families of children with disabilities.

BLOOM: It sounds like having your own business allows you to balance the needs of your kids and your work.

Michelle Miller: It’s wonderful. I’m able to put Dmitri on the bus and able to help my daughter get ready for school, and when Dmitri gets off the bus I’m there. If I need to pick either of them up from school— or take Dmitri to doctor appointments, and he has a lot of them—it’s not an issue. I can adjust my schedule. If the kids need something, I can put my work down.

BLOOM: What kind of things does Dmitri enjoy now?

Michelle Miller: He likes electronics and musical toys. A favourite thing of his is a bouncy ball that he’s good at bouncing. He has an MP3 player with children’s music that he likes. And recently he began interacting with an iPad, which really shocked me. He likes Netflix and there’s a group of apps I got for him called Starfall, for reading. I can hear him in his room right now playing the one where he has to do a sequence of events to make the turkey dance.

BLOOM: How did your husband manage with the adoption?

Michelle Miller: He was amazing. He never put up any roadblocks. He came out to visit us and worked remotely. He co-parents with me. He parents Dmitri just like I do.

BLOOM: What practical advice would you offer a family adopting a child with disabilities?

Michelle Miller: I would say reach out and find out what sort of services are available in your local community and network with other parents. Many times you won’t know exactly what services you can get until you speak with other parents. I talked a lot with Dmitri’s respite-care workers in Virginia and every time I go into his school, his teacher and I compare notes and I observe how they interact with him. In some ways you can’t prepare yourself for adopting a child who can’t talk. They’re sort of trapped in themselves.

BLOOM: How is Dmitri doing these days?

Michelle Miller: In the past three to four months he’s become a pretty happy kid. He smiles a lot. He’s really settled and comfortable. If he wants something like the ketchup he’ll go and get it himself, which is pretty huge for him. That shows me that he feels really comfortable and confident.

BLOOM: How do you feel about adopting Dmitri now?

Michelle Miller: I don’t think about it too much. I know it was the right choice and I’m so happy we did it. Even though it’s been really difficult I would do it again in a heart beat.